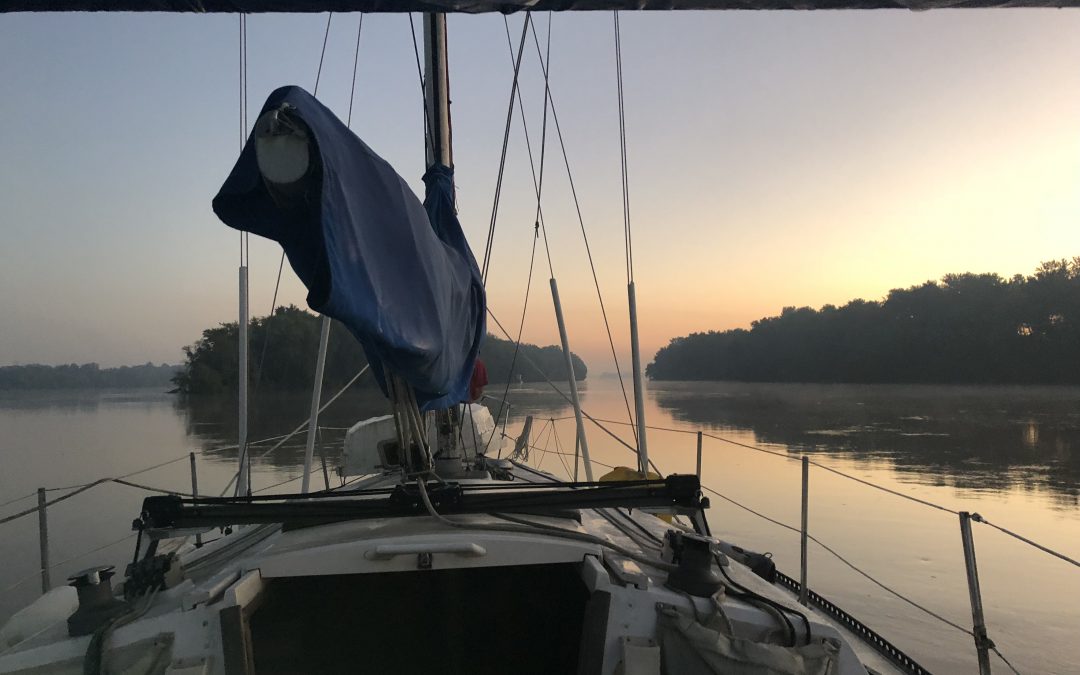 “Don’t go down the Mississippi!” everyone and all the articles said.  “There’s nothing to see but bugs and barges.”

They were all wrong. It was beautiful.

I have an old S&S designed Catalina 38 named Euphoria. She is the Catalina with the tumblehome sides and an attractive stern. Euphoria’s home port is on a wide and pretty stretch of the Ohio River near the French Island Marina and Boat Club at mile marker 766 on the Indiana bank – just downriver from Owensboro, Kentucky.

Euphoria and I hate winter.  She tugs at her dock lines and whimpers every time I bring around the jugs of pink antifreeze. 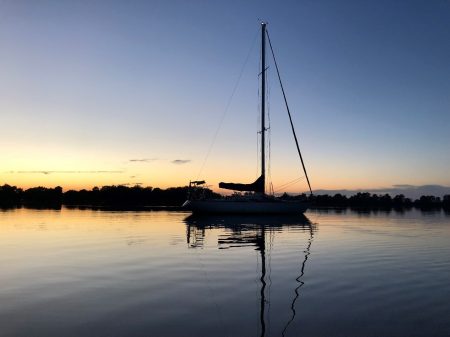 Two years ago – after I read some gibberish from my lawyer concerning a divorce hearing – Ron Barcardi, Euphoria, and I had a long conversation about winter and our futures. And – just before sunlight the following morning – we decided that all three of us would head south together.

Ron and Euphoria seemed to be happy about the idea of heading off into the palm tree shaded sun but refused to turn a darn tap. So, I became a workaholic and a penny-pinching miser living off seventy-hour work weeks, eighty-eight cent loaves of bread, discount tuna and rice and beans.  Euphoria, however, continued to spend lavishly at Defender and West Marine for the trip. Ron gave me confidence and occasional headaches. We three amigos slugged on together until a woman came along.

Yes, I picked up a first mate.  She is attractive. Her name is Autumn. She hates winter too.

We are working people. To quit work just shy of fifty and go off sailing is a serious stretch. Pieces must fit together and getting south from our home port – considering floods, finances, hurricane season, vacation schedules, early freezes and low bridges – takes some planning.

I needed to quit work after the beginning of the year to finish my term in public office and maximize my available benefits at my money-making job. Autumn needed to run a winning election for her candidate.  It is entirely too cold for reasonable people to motor down the Ohio and Mississippi Rivers in January. Both rivers flood in the spring. I must bid my vacations when more senior employees do not want them. Euphoria cannot get to New Orleans before the end of storm season. Autumn and I needed to make as much money as possible, get properties in order, move Autumn’s mother halfway across the country and get through the elections.

And, did I mention those damned bridges? Euphoria’s mast is a bit tall for the normal route – the Tennessee-Tombigbee Waterway – where a fifty-two-foot fixed bridge blocks our way. I could have dropped the mast on Lake Barkley or Kentucky Lake and raised it in Mobile, Alabama; but I’ve been up and down the Tenn-Tom before – it is expensive and time-consuming to pull and reset the mast. It is also more difficult to navigate the locks and dams and the marina fuel docks with eight foot of mast sticking over both the bow and stern. And, the muddy Mississippi River kept hollering to me, “Come on, son.  Let’s go to New Orleans”.

Autumn and I decided on a two-day, two hundred mile, late September weekend trip from our home port to the new transient docks in Paducah, Kentucky – followed by a two-week, nine hundred and fifty mile trip in October down the Mississippi to the Big Easy. Apparently, both rivers conspired to flood in the fall as we motored down them. 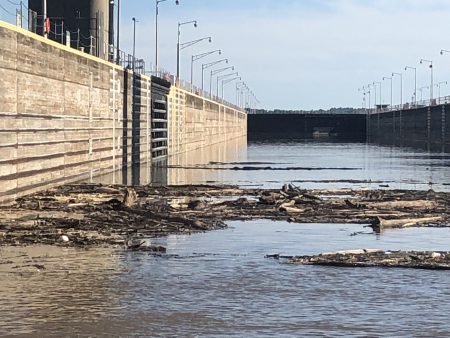 Driftwood in the Lock

When rivers flood, they clear the banks and fields of downed trees and branches. This drifting wood fills the rivers with navigational hazards until the water drops and the driftwood settles into a new spot down river. The driftwood was so thick on the Ohio River leg of our trip it choked off the entrance to Smithland Lock and Dam.

The current ran fast.  Euphoria – a six-and-a-half mile-per-hour boat under power – made ten and twelve racing down the river. As we approached the lock, we could see the entire entrance blocked by driftwood piled upon itself like broken ice sheets in a floe.

I shifted to reverse to slow our speed but only swept sideways to port. The current pushed us on as we ran at almost a right angle to the wall in the dam leading to the lock towards the drift and the opposite lock wall. I shifted to forward to gain steerage, turned the boat hard and then to reverse again to slow our collision speed. I did this over and over.

As we proceeded farther into the towering concrete lock walls, the river current slowed – its flow stopped by the lock’s gates – and we pushed Euphoria’s bow gently onto a pile of floating logs and river debris. Autumn took the boat hook forward, grabbed on to whatever she could hook and pulled us through a trash pile that on land could be a good start to a bonfire. Once clear, we watched a bald eagle and a blue heron fly through the lock chamber as the lockmaster lowered us down to the next river pool.

Just before Smithland Lock and Dam, we stopped at Elizabethtown, Illinois to eat on Dad’s old party boat that has been reincarnated into an outdoor family seating area tied up next to a floating restaurant. Before Dad was killed, he sold his floating creation to the restaurant. Shortly after he pushed off to deliver it down river to them it sank. He refloated and delivered the boat. Now the restaurant serves succulent fried river catfish and hushpuppies to patrons sitting on the open decks in the sunshine. I smuggled Dad’s favorite drink on board – a Dewball made with Seagram’s Seven and Mountain Dew –and offered up a toast to his memory. Our next stop down Memory River was Paducah, Kentucky. 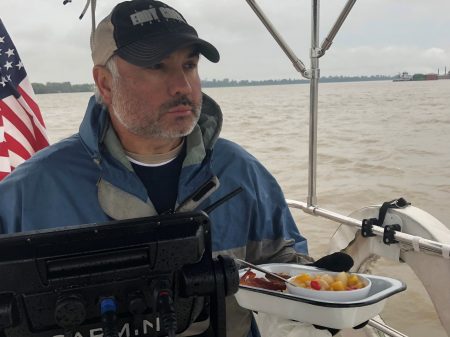 Breakfast at the Helm

Autumn grew up just south of Paducah. She lived near Moors Resort and Marina on Kentucky Lake ­– the marina her folks owned – where she learned about boats and all the good beer joints and restaurants in Paducah.

Paducah is a river town. It sits at the intersection of the Tennessee and Ohio Rivers and is a major hub for river traffic. When we made Paducah, Autumn treated me to barbeque and Italian sandwiches and beer. The city treated us to a wonderful river museum and a nice, affordable dock.

We went home for two weeks to work. We came back on a pleasant Saturday evening and pulled away from the transient docks. The engine overheated. The Ohio River had been so full of trash that I had to empty the raw water strainer several times on the way down. The last time I did it I did not get it sealed well and the pump sucked air. It was an easy fix. We were on our way.

I could wax poetically about the confluence of the Mississippi and the Ohio – but Mark Twain already covered the subject well and any attempt of mine would be subpar. Let me just say that it was rough and muddy – flowing like it was running down a mountain full of trees, tires and driftwood.

The current was not a problem for navigation. We made great time. Anchoring was the problem. There are few sleek marinas to pull into for the night. The Mississippi is an anchor only trip. We used a twenty-two-pound Danforth – the best river mud anchor bar none – a short section of chain and a hundred feet of nylon rode to anchor behind islands and in between wing dams and dikes. I do not think I could have made the trip singlehanded in those river conditions.

The current flowed so fast it was impossible for me to pull the boat against the current with the anchor rode or – once free – raise the anchor and secure it on deck before we could drift down and hit something. Autumn manned the helm. We were patient with each other. I went over the game plan until she was sick of my voice. We moved slowly as she drove the boat up, back, and over the anchor and I hoisted the heavy, clay clobbered chunk of metal onto the boat. 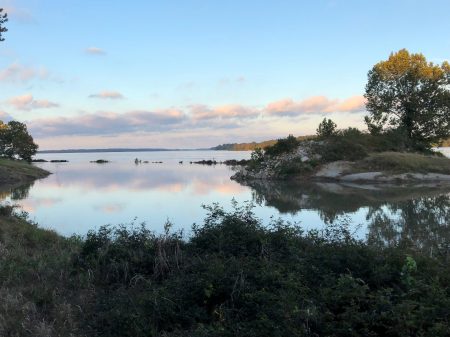 On the upper Mississippi and the Ohio Rivers, you never see more than fifteen barges in tow. They run three barges wide and five long. This squeaks through perfectly in the Corps of Engineers’ locks. On the lower Mississippi, where there are no dams, I have seen fifty-six barges made up in a single tow. Thirty-five barges are more common. They run seven long and five wide and when they are pushing up river, against the current, with a triple engine push boat, making a tight turn, they create a massive wake that bounces back and forth against the river banks and combining with other waves to make the river a violent, dangerous  and most unwelcome place to be.

One big push boat, pushing a tow of thirty-five barges upriver, swamped a fishing boat near the bank, washed our decks with muddy river water. The deluge found its way through the forward hatch to soak our v-berth bedding and sickened my first mate as she huddled below trying to keep the food on the galley stove and the dishes in the sink. And I still do not do a good enough job explaining just how violent these waves are. The current and the push boats require a keen sense of awareness.

One of the drawbacks to the Mississippi as a route south is limited fuel stops. Once you leave Paducah there is only Memphis and Greenville, Mississippi until you get to New Orleans. The river current also helped us use less fuel than anticipated. I carried six five-gallon jerry cans on deck – and with the raging river and the efficient little diesel, we were flush with fuel.

We saw pods filled with hundreds of white pelicans. Autumn risked life and dinghy to check out a perfectly salvageable houseboat marooned on an island from an earlier and larger flood. She saw deer on the island and proved to me she could tough out oaring against a raging current in a small hard dinghy, walk through chest-high briars and grasses and a swamp any alligator would be proud to inhabit.

She made fresh bread and brownies on the stove. I am not kidding. I have never before had fresh brownies on a sailboat. You cannot have her. She is mine.

We stopped in Memphis for fuel, water, a trip to the Bass Pro Shop Pyramid for better and warmer wet weather gear, barbeque, Beale Street blues and the Peabody Ducks. We stopped again in Greenville, Mississippi where we missed the Hot Tamale Festival by a day. We loved both cities. 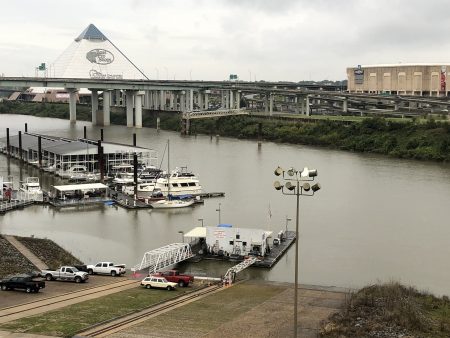 There are fantastic cabins and fish camps all along the lower Mississippi. There are trees made up of a thousand shades of green. There are sandbars and expanses of river so big as to be inconceivable. There are anchorages without another human being in sight and so quiet you can hear the chirp of every bird and the buzz of every mosquito.

The lower Mississippi is not perfect. It is raw. It is cold, wet and buggy in the fall. It offers long, remote stretches for adventurous recreational boaters. It is beautiful beyond my words. It takes you right to the Industrial Canal in New Orleans, where you can reacquaint yourself with human foibles and the French Quarter, The Gulf of Mexico and beyond. It should not be missed.